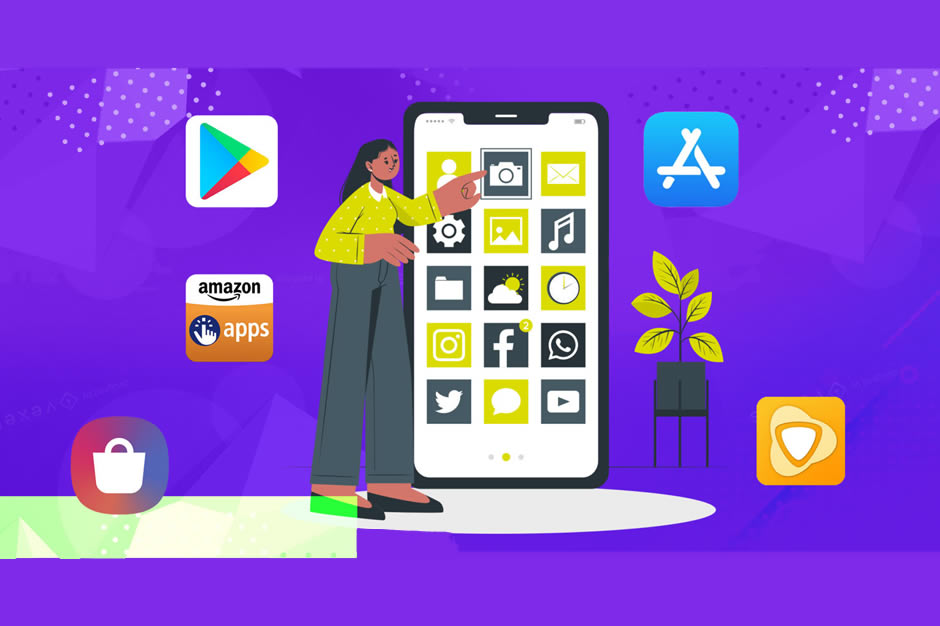 In this blog, we list down the top mobile app stores available to release new apps.

There was a time when there were only a handful of app marketplaces. While Google Play Store and Apple App store continue to be the most prominent ones, the alternative app stores also offer a fair global reach and promise a good ROI. These apps stores also cater to a specific niche.

Though these alternative application stores are less prominent than their 2 major rivalries, this very reason makes them the go-to app stores for your app launch. Since these app stores are smaller, your app can be more discoverable on niche or alternative app stores. You may stand a chance to get better visibility, which may eventually lead to higher downloads.

Here’s a list of some of the top app marketplaces that offer a widener reach.

It was one of the first mobile app stores to be launched and it not only hosts apps, but also movies and tv, music, magazines, books, devices, and more. Thus, it has a wide range of customers. Moreover, there were 3.6 million apps in this application store as of 2021. 96% of the apps in the Google Play Store are available for free.

Google Playstore has a very powerful search engine. To reach your potential users, you can take the help of paid ads or implement ASO (App Store Optimization) techniques to boost your downloads. Also, ensure that you select the right category while publishing your app on the app store. The category you select influences your competition. The category should be based on your product niche and business model.

As of 2022, there are about 3.3 million apps and games available in the App Marketplace which also comprises applications developed for Apple Smart Watches and Apple TV. 92% of the apps in the iOS app store are available for free.

The iOS App store provides a more personalized way of browsing, shopping, and installing applications for your iPhone, iPad, Mac, Apple Watch, and Apple TV. The iOS app store has strict rules and regulations than Android Play Store. Hence, your app should be fit enough to solve a problem and provide a good user experience.

When you develop an application for Android or iOS, equip it with top-notch features and a user-friendly interface as the app is going to compete against 3.5 million other apps.

It was initially released in March 2011. This app marketplace targets Android OS users. Additionally, the Amazon Appstore delivers official apps for the Fire Tablets, Fire TV, and Fire Phone and is preinstalled. More than 460,619 apps were available on the Amazon App Store by the first quarter of 2021.

If you get your app published in this app store, it is more likely to be recognized by the brand loyalty and brand recognition of Amazon. Moreover, you will be able to download the Amazon Appstore from any powered Android device for free of cost. It is totally dominating the marketplace of applications as well.

It is an official app marketplace for Samsung devices. Hence, it obviously delivers apps exclusive to Samsung Galaxy tablets, smartphones, and Samsung wearables. Samsung smartphones are the most in-demand among the Android devices and this app store is pre-installed on all Samsung devices offering you a good opportunity.

It is available in 125 countries and supports mobile applications that not only run on Android but also on Windows and Bada Mobile operating systems. Having your app listed in the preloaded Samsung Galaxy store can win you a lot of potential downloads.

Sony devices have primarily focused on entertainment and so does its app marketplace. It hosts applications specific to its niche like Sony Smart TVs, Internet, Streaming, and more.

This app store list is designed particularly for Sony users who would prefer to find an app in native on their devices than downloading PlayStore for the same.

Aptoide is an independent Android app store. It has a very sound and organized way of displaying the applications’ listings on the store. Its spontaneity and ease of navigation make it more captivating to be on the top app stores list.

It hosts apps for gaming, productivity, store apps, and many more. Since it does not target any particular niche, you should consider publishing your app on Aptoide as it is also less competitive and offers a wide reach.

Getjar was founded in 2004 and is an independent mobile app marketplace. It has more than 2 billion mobile applications placed on the app store list and more than 3 million downloads on a daily basis. It has a huge outreach of nearly 395,000 developers on board to distribute the applications.

It has a reach of 200 million Android users. It not only supports Android but also iOS and other older versions of Windows Mobile. With minimal requirements to fulfil, it does not cost much to get your application published on this app store.

Launched in 2011, it is an independent browser-based app store for mobile users. Opera App Store offers cross-platform applications that can also run on web browsers. With a great digital application distribution platform, it allows users to browse and download the app from more than 7500 devices. It supports multiple formats of apps like Android, iOS, Java, and Windows.

More than 86% of the mobile applications for Android devices are catered by Opera Mobile Store completely cost-free. 70% of the apps on the Opera app store are free while 30% of them are paid. This app marketplace categorizes mobile apps into social media apps, business apps, video apps, e-books, video games, and more.

If your target audience is in China or areas of the world where Huwaei has a higher mobile market share (e.g. African countries such as Mali, Liberia, Niger, Ghana, etc.), you should certainly go with Huawei App Store.

Huawei app store is preinstalled on most of the company’s devices. It offers apps, games, and also its own cloud storage solutions. So if you are looking to capture the app marketplace in China, Huawei App Store is the apt choice.

It should not come as to surprise that 1Mobile has a crazy number of app users and is one of the most popular alternatives to the Google PlayStore.

It distinctly focuses on gaming and entertainment but also supports other app types. If your mobile app is appealing enough, it might get a chance to acquire more downloads by getting to the top in the categories like ‘Editors’ Choice’ or ‘Games of the Week’. Offering support in 13 different languages, gives your app a chance to reach out to a wider audience.

It is an official app store for LG devices specifically for Android applications. Its mobile app store is very similar to SmartWorld. It is preinstalled on all LG mobile phones. It also offers other apps that are specially developed for LG TVs and its other devices.

It was founded in 2009 by Mathijs Vogelzang and a Zurich-based company called AppTornado. This is a browser-based mobile app store.

It has successfully launched marvelous Android apps with more than 50 million app installs in totality as of 2020. Android apps are easy to locate here as it is segmented by search, rankings, and categories, and even popularity-wise for some countries.

It is a major misconception that Android apps are found only on the Play Store and iOS apps are available on App Store. Many of the above-mentioned application stores are not preinstalled on mobile phones but do have a big number of Android, iOS, Windows, or even cross-platform web-based app users.

If you wish to scale your app business quickly, publishing your app on all these app stores should be your foremost strategy. This will help you expand your client base and quickly meet your business goals.

Rajinfosys is a leading offshore app development company in India. If you are looking to build a custom web or mobile app, you can send us a business inquiry at sales@rajinfosys.net